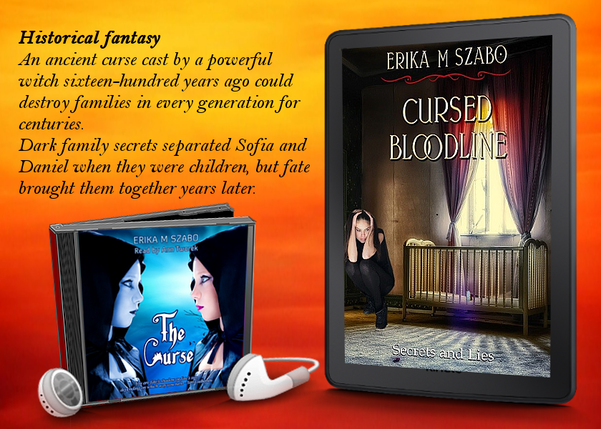 The idea to write this book came to me when I found an old letter from grandma and I started thinking... what if this letter was written by and ancestor who lived hundreds of years ago? What if it would contain information that could save someone in the present? 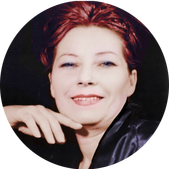 ​Erika M Szabo
The idea to write this book came to me when I found an old letter from grandma in my drawer where I keep precious holiday cards and letters. I saved that yellowed letter because I loved her neat handwriting.
It doesn't take much to trigger a writer's imagination, so I started thinking... what if this letter was written by and ancestor who lived hundreds of years ago? What if it would contain information that could save someone in the present? From then on, the story formed and started pouring on the pages.

Read chapters from the book

Is it possible that an ancient curse cast by a powerful witch sixteen-hundred years ago could destroy families in every generation for centuries?
Dark family secrets separated Sofia and Daniel when they were children, but fate brought them together years later. Jayden, Sofia’s brother, finds a leather book in his grandmother's secret room that was written in 426 by a shaman. Reading the ancient runes, they learn about their family's curse. If it remains unbroken, the curse will bring tragedy and ruin their lives as it destroyed many of their ancestors' lives. Could they find the way to break the ancient curse?
A glimpse into the lives of teenagers in present and past. How mental illness and the rejection of people who love differently effects families and peoples’ lives.
Suitable for young adults.
“This is the curse of an evil deed that incites and must bring forth more evil.”

"And yet—and yet—ah, who understands?
We men and women are complex things!
​A hundred tunes Fate's inexorable hands
May play on the sensitive soul-strings."~Amy Levy

Excerpt from the book

Is it possible that an ancient curse cast by a powerful witch could destroy families in every generation for centuries? Can the curse be broken?

Present day
“Wow!” Sofia blurted as they entered the secret room. “You were right, there are lots of treasures in here.”
“I looked only in this trunk but look at the shelves.”

Sofia walked to the shelves and touched the carved, wooden and stone statues one by one. “Look,” she said, “the Sacred Turul. This wood carving is a masterpiece!”

“Yes, I estimate it to be at least a thousand years old. Look at this horse.” He pointed at the black onyx statue.
“Magnificent!” Sofia marveled.

“We can look at those later,” Jayden mentioned to Sofia. “Let’s see if we can find more writing in the trunk.”
“Okay…” Sofia hesitantly replied. She was having a hard time averting her eyes from rows after rows of statues, jewelry, headdresses adorned with beads, gold chalices and bowls.

Jayden opened the wooden trunk and started taking out the items that were wrapped in leather. He pulled the coverings open which revealed swords, knives, handmade leather shoes, and carefully-wrapped scrolls.

“Jay, look!” Sofia pointed at the inside of the trunk lid. “There’s an envelope and it doesn’t seem old.”

Jayden grabbed the corner of the white envelope but couldn’t pull it away. “It seems to be glued to the top,” he stated as he carefully lifted the corner with a knife and pried it away from the wood without ripping the paper.

As he turned it he saw writing on the envelope. “For Sofia and Jayden,” he read out loud. “It’s Grandma’s handwriting and it’s for us.” He sat down on a box, opened the envelope and pulled out the folded letter. He started reading it out loud.

Dearest Sofia and Jayden,
You’re reading this letter, which means I’m gone. I swore to your mother that I would never tell you about the family curse, but I cannot take it to my grave. Although your mother always strongly believed that it is merely a stupid legend and refused to listen to me, I must let you know somehow. Jayden, your life in danger…

The year 426 in the Carpathian Basin
As they got close to the trees and peeked out, they saw disheveled men sitting on the ground around fires. Their savage laughs, as they were eating and drinking, cut through to their hearts. Elana gasped when she saw the lifeless bodies of her neighbors thrown to the ground. Zala turned to Elana and raised his eyebrow, silently asking if she was ready. Her eyes shone with anger. She nodded and placed an arrow on her bow and pulled the string, aiming at the head of the loudest bandit who seemed to be the horde’s leader.

Zala whispered, “You have lost the most. You have the right to revenge.”

Elana let the arrow fly, and it pierced the bandit’s forehead between his eyes, coming out at the back of his head halfway. His body fell backward, limp and lifeless.

Zala looked at the waiting wolves and motioned them to go forward. The bandits scrambled to their feet in horror as their leader fell, and the wolves attacked them. Zala and Elana started riding around them in circles, aiming and shooting as the men tried to flee. A few slumped to the ground pierced by arrows, others screamed as the wolves chomped at their hands.
Elana spotted the alpha as he clamped his powerful jaw over a man’s wrist and with a jerk of his head, bit the hand off. And then Elana froze when she saw her mirror image looking at her with crazed eyes.

“Tuana!” Elana yelled and urged her horse toward the disheveled young woman.

Tuana turned her horse and kicked its side, urging the horse to a gallop. Within seconds they collided. The horses neighed in terror as the women were thrown off their backs by the impact. Both women jumped to their feet and faced each other. Elana gave out the warriors’ battle cry, raised her sword, and thrust it toward Tuana. Elana’s move was swift, but Tuana was fast as well and leaned out of the way of the deadly blow. As Tuana jumped back, she looked down with terror in her eyes. A gray wolf standing next to her growled and dropped Tuana’s hand on the ground; it was still clutching the sword. The wolf shook the blood from his muzzle, turned, and ran toward the bushes. Tuana stared at her stump as it spurted blood on her legs.
​
Tuana howled like a wounded animal and then gave out an insane laugh as she held the stump of her arm close to her chest and started backing away. “I curse you and your descendants! Every woman in your bloodline will have a daughter like me who will be thrown away like garbage. The daughters will kill their brothers and leave their sister alive to carry the bloodline. All mothers for eternity will pay for what your mother did to me.”

People at Slate R. Raven
5.0 out of 5 starsGreat book! 📖 Talented Author!
July 25, 2019
Format: Kindle EditionVerified Purchase
As usual Erika M. Szabo knocks this one right out of the park! Taking us back to the beginning where the curse begins allows us a view normally not offered by most authors. Her talents are once more shown in this latest release!

Amazon Customer
5.0 out of 5 starsAlways a pleasurable read!
July 27, 2016
Format: Kindle EditionVerified Purchase
I am a true fan! I enjoyed this bold and I eve again found myself in the book. My only complaint is that once again,I want more. Thank you for writing and allowing me to escape into another time and place.
2 people found this helpful

Shebat Legion
5.0 out of 5 starsA story within a story!
July 24, 2016
Format: Kindle Edition
The Curse by Erica Szabo is a story within a story and well executed. The protagonist, Emily returns to her homeland of Hungary to visit her brother Jayden who has made an exciting find, an ancient book. On her journey home, Emily reconnects with her childhood sweetheart and their romance rekindles. As Emily reads the book her brother has found, she finds remarkable similarities to her life and her brother's. I won't give the rest of the story away, but I found it is an enjoyable read and a fast paced one, with likable characters and an interesting plot. I quite enjoyed the blend of Hungarian culture sprinkled throughout, and the mention of Hun history is interesting and integral to the plot. Well done, Erica! Five Stars!
2 people found this helpful