A Basketful of Kittens:
Storybook for children 4-12 about friendship, compassion toward animals, and dealing with bullies 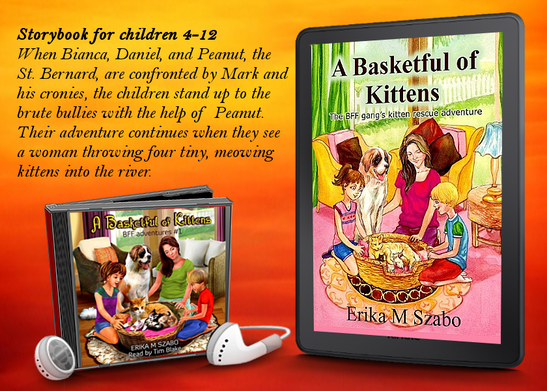 ​Bianca and her best friend, Daniel, grew up together under the watchful eyes of Peanut, Bianca’s St. Bernard. The huge dog was their babysitter, playmate, and bodyguard. They were inseparable, so people started calling them the BFF Gang. When summer vacation came, Bianca and Daniel decided to go swimming in the river when they were confronted by Mark and his cronies of the Wolf Pack Gang. Find out how Peanut told Mark, in his own doggy language, how much he dislikes brute bullies. When Bianca and Daniel finally got to the river and were happily splashing in the cool water, they heard Peanut’s angry bark, and they saw an old woman approaching the riverbank with a basket in her hand. When the woman reached the edge of the river, she took a tiny, meowing kitten out of her basket and threw it into the river as far from shore as she could. The kitten flailed in the air, desperately crying, and then splashed into the water. Find out what happened to the kitten and how the BFFs dealt with Mark’s gang, in this first adventure of the BFF Adventures series.

"I received a copy of this book before publishing, and I can honestly say that this is by far the best children's story I ever read to my seven-years-old son. He hung onto every word and displayed a wide range of emotions throughout the story such as sadness, fear, excitement, and sheer joy. What I value most is when we finished the book he said to me, "Dad, I wish I had a dog like Peanut." At first, I thought that he's just like any other little boy is wishing for a dog, but then seeing his unusually sad expression, I asked him why he wants a dog like the one in the story. He said, "Because a dog like Peanut could save me from Connor." My heart jumped into my throat because I never noticed any sign that my son was bullied. When I asked him why he didn't tell us before, he said because he thought I would be mad at him not being able to defend himself. This story encouraged him to tell me and we are working on solving his problem together." Brian VanBramer