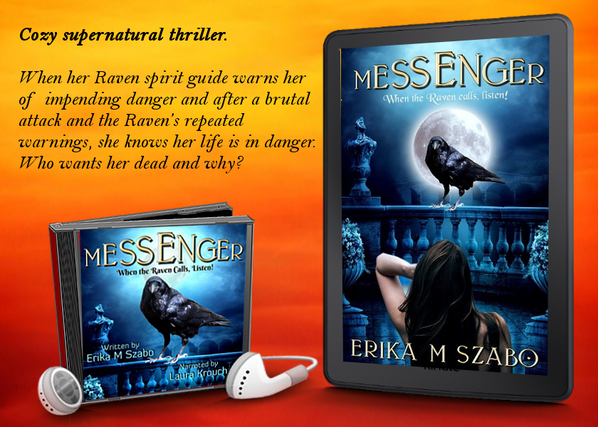 I thought about what an old Native American woman told me once when I was her nurse in the hospital. She said my totem animal is the badger because I'm courageous, aggressive, healer, determined, focused, and confident. My imagination created a story about a doctor who gets a warning message from her spirit animal, the Raven.

Read an excerpt from the book

​Lauren stood by the open window of her second-story office. The sun was about to set and painted the top of the trees in the park across the street with golden light. Shaking her long auburn hair from the constricting ponytail, she enjoyed the beautiful view after the hectic day of treating patients with all kinds of problems. She sipped her tea, leaned on the window frame and watched people hurrying about their business on the sidewalk. A noisy group of teenagers was shooting hoops in the park’s playground and a flock of pigeons fought with a pesky squirrel that was about to steal the tasty seeds, courtesy of Mrs. Wilkins. The old lady fed the birds every day, rain or shine.

“Lauren, Marcia and I are leaving. Should I call you a cab?” Kathy, her attractive redhead receptionist with freckled skin knocked on the open door. Her curly, long hair flipped as she turned toward Marcia, her plump blond nurse, who appeared beside her.

Lauren turned to look at her best friends since high school. When Lauren applied to medical school, she tried to talk Marcia into applying as well. She had the credits and her SAT score was even higher than Lauren’s, but Marcia said becoming a doctor was not what she wanted. Her dream was to become a nurse. After graduation, she worked at a hospital and when Lauren started her practice, she joined her. Kathy never had any ambition to go to college. She was a member of a coven and enjoyed being a practicing witch. She worked at the Presbyterian Hospital with Marcia as a receptionist, and as soon as Lauren opened her practice, she joined her as well.

“Okay, then. I’m exhausted, it was a busy day.” Kathy sighed. “I need a hot bath and a tall margarita.”

“Me too,” Marcia laughed.

“Yes, it’s been a long, tiring day.” Lauren smiled feeling drained. “But you two made the day go smoothly, as usual.”

“Of course,” Marcia giggled. “You pay us well to do our best.”

“Shoo, get out of here and enjoy your night. See you tomorrow.”

“Goodnight,” she heard the women say in unison as they turned and walked toward the reception area through the hall. “I’ll lock the door,” Kathy yelled back.

“You’re so lucky!” Kathy replied. “I only have my cat to keep me company on lonely nights.”

Lauren heard the front door open and Marcia’s voice again. “Why don’t you date? It’s been six months since you got rid of that leech. You should cast a love spell or something and snag a nice man.”

“Marcia, I told you many times.” Kathy raised her voice in anger. “Spells are powerful, you can’t just go and cast a love spell.”
“Alright! I was just saying. You can unruffle your feathers.”

The door closed with a thud and click. Lauren smiled and turned back toward the window. I’m glad, she got rid of that loser. He was draining her dry for years, but she clung to him. Marcia helped her to realize that he was just using her. The sharp ringtone of her phone snapped her out of her thoughts.

“Sorry, honey, I’ll be a little late. I’m stuck in traffic.” She heard her husband’s voice, muffled by the sounds of honking and the loud purr of the car engine.

“It’s okay, I have some charts and lab result to go through. I’ll order Chinese when you get here, and we’ll pick it up on the way home.”

Lauren didn’t really feel like doing paperwork and looked out the window dreamily. I’ll tell him tonight, after dinner.
Across the road in the park, there was a group of mothers with their young children. It seemed like they were all friends, spending an afternoon together, something Lauren imagined doing herself. Being out there with her son or daughter, pushing them on the swing after she’d spent her day at work seemed so rewarding. She wouldn’t want to give up her career to be a stay at home mom, and she knew Luke wouldn’t give up work either. Coming to a compromise now must be a priority, as their child was growing within her, so maybe he’d agree to hire a full-time nanny. Finally. I’ll be a mom. Lauren put her hand on her belly and couldn’t stop smiling.

Suddenly, she heard a deep, throaty kraa sound. Lauren took a deep breath. She knew what the all too familiar sound meant. Her eyes shot toward the tall oak tree across the street where the eerie sound came from. The Raven’s shiny, black eyes fixated on her and let out another loud screechy sound. Lauren’s stomach shrunk into a knot and a dreadful feeling washed over her. No! Please not again! She screamed in her mind. “Shoo!” she yelled out loud. “Nothing bad is going to happen.”

The Raven, flapped its wings, called again even louder, which sent sheer terror through Lauren’s nerves as she remembered her grandmother’s warning. “The Raven is your messenger and it warns you that something bad is about to happen which will change your life. You must perform a protection ritual and call on the Wolf spirit to protect you from harm.”

A sign of something bad coming wasn’t what she needed. Not with the happy news confirmed this morning. Lauren rushed to her desk and yanked the bottom drawer open. In there was a box with her grandmother’s spell-book, candles, and herbs.
​
She looked up feeling anxious when she heard the front door of her office opening. It’s too early for Luke to get here, maybe one of the girls must have forgotten something. She called out, “Is that you, Marcia, or Kathy?” Closing the drawer, not wanting anyone else to know about the family secret, Lauren stood, walking over to the door. Just before she got there someone rocketed through the door. A gloved fist in front of her face grew large and the next thing she knew she was falling backward and hit the carpet with a thud. Darkness began to envelop her when she felt an excruciatingly painful blow to the side of her head before she lost consciousness.

Heather Wamboldt rated it it was amazing
This short story is one that can be read quickly which is a good thing because it captures your interest right away and keeps you glued to the pages. It is a great supernatural about one woman's belief in her spirit guide and how that belief may save her life. The story is well written, with danger, betrayal, and suspense.
I am looking forward to more books by this author.
I read and reviewed this book with no obligation.
Like  · comment · see review

Heather Bane rated it it was amazing
This book grabbed my attention from the very beginning. The story is very well written. This was a really hard book to put down. I will definitely be reading more from this author. I would recommend reading this book.
I received a free copy of this book via Booksprout and am voluntarily leaving a review.
Like  · comment · see review

Pat Eroh rated it it was amazing
Well, now I have a new author that is among my very favorites! This is a really compelling story that absolutely had me shaking in my boots! I could not put this book down until the end and then, I had trouble sleeping. I am hoping for more by this author.
I received a free copy of this book via Booksprout and am voluntarily leaving a review.
Like  · comment · see review

Lesley Hewitt rated it really liked it
A nice little book
Raven messengers, witches and an unhappy marriage. Friends that make better enemies and romance. I enjoyed this book but felt it could have had more to it so four stars.
Like  · comment · see review

Rachel Benham rated it it was amazing
Great short read. The story line was good and the characters were well written. To love someone and have them betray you is the worst. I am so happy Lauren got her happy ending.
I received a free copy of this book via Booksprout and am voluntarily leaving a review.
Like  · comment · see review

Dawn Milligan rated it it was amazing
This is a well written short story I enjoyed the characters and story line it's fast paced and well done.

H. Bane
5.0 out of 5 starsLoved this book
November 19, 2019
Format: Kindle Edition
This book grabbed my attention from the very beginning. The story is very well written. This was a really hard book to put down. I will definitely be reading more from this author. I would recommend reading this book.

People at Slate R. Raven
5.0 out of 5 starsWhat could be a better way out of this reality!
November 5, 2019
Format: Kindle Edition
From the first chapter I was drawn into the book. Every time I needed to do something else, I ran late... because putting the book down was so rough! The intricate weave created by the author is breathtaking. I’ll definitely be watching for further work by Erika M. Szabo. If you enjoy reading, this is a must have for your collection

Dr. Patricia Eroh
5.0 out of 5 starsawesome thriller
November 11, 2019
Format: Kindle Edition
Well, now I have a new author that is among my very favorites! This is a really compelling story that absolutely had me shaking in my boots! I could not put this book down until the end and then, I had trouble sleeping. I am hoping for more by this author.

Rachel Benham
5.0 out of 5 starsGreat read
November 18, 2019
Format: Kindle Edition
Great short read. The story line was good and the characters were well written. To love someone and have them betray you is the worst. I am so happy Lauren got her happy ending.