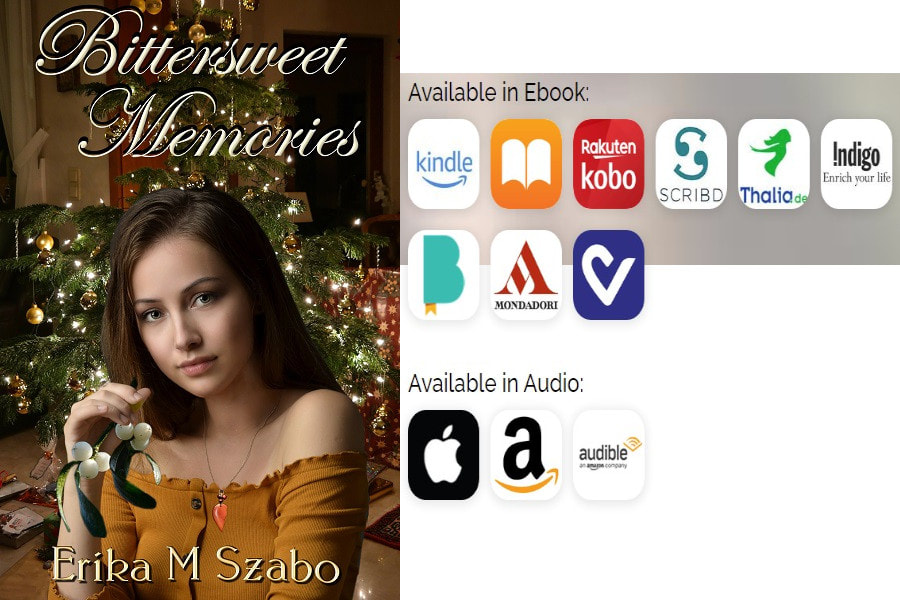 I always loved Christmas time at Rockefeller Plaza and midnight mass at St. Patrick cathedral. The memory of ice skating, the wonderful feeling of peace and the smell of roasting chestnut in the air triggered this love story.

buying links
Elana was born to a homeless, drug addict mother and left on the steps of St. Patrick Cathedral. Moving from one foster home to another, her life was a revolving door of shattered hopes and disappointments.

As soon as she felt an emotional connection to anyone, the foster kid in her quickly pushed the feeling away. The last thing Elana wanted to do was to get close to someone she would probably never see again. The necessary emotional defense served her well throughout her unpredictable life.

Until she met Luca.
​
Allowing them only a short time of happiness, cruel fate tore them apart. All she had was hope and half of the rosewood heart pendant he carved to hold onto.
Will they meet again?

Included in this eBook, paperback, and audiobook

Winter vacationThe hallways of NYU School of Medicine were buzzing with the chatter and shuffling of hundreds of students all eager to start their winter vacation. Most would be traveling to different states or abroad to visit family and loved ones for the holiday. But not Elana. She had a tradition of her own.
Ashley, noticing the not-so cheerful look on Elana’s usually happy face, gently touched her arm. “Are you okay, Elana? You don’t really look like you’re in the Christmas spirit.”

Elana’s lips curled into a faint smile. “I’m fine. Just tired from studying for the big exam. I’ll see you after Christmas break, okay?” The two hugged briefly before parting ways into the busy stream of traffic.

Suddenly, Elana heard Ashley yell her name from the other side of the hallway. “I forgot to wish you Merry Christmas!” Elana only smiled in return, waving at Ashley before turning the corner and heading outside.

Bracing herself against the bitter cold, Elana hailed a cab and headed uptown to her lonely Manhattan apartment. The driver whizzed through clusters of traffic, singing along to the radio. His raspy voice was way out of tune. I wouldn’t dare sing in public if I had a voice like you, Elana thought as she watched small tufts of snow starting to accumulate on the parked cars and sidewalk. The sight opened a flood of painful memories: a broken dam of faded smells, faces, and words that were lost in the moving sands of time.

This was a bittersweet holiday season for Elana. Though there were good memories attached to Christmas, there were also many in her past that she wished she could forget.
Twenty-two Years AgoOn that stormy Christmas Eve twenty-two years ago, a young woman trudged through the unforgivingly cold winds of downtown New York City with a bundle of rags held tightly to her chest. Glass beads of frozen tears clung to the exposed skin of her face. The woman, slightly dazed and clearly distraught, shuffled aimlessly through the snow that clotted the empty sidewalk.

She was uncertain how long she had been pushing her way through the whirling snow, but her raw cheeks were evidence of the stretch of time and the ferocity of the wind. To anyone driving by, she appeared to be just another homeless person: one of the city’s many untouchables caught in the fierce weather, trying to find shelter. They’d give her a callous look and go about their business.

The woman, guided by her numb feet, walked and walked until the dim light of a steeple shone through the flittering blankets of falling snowflakes. Slowly, she approached the steps leading up to the door and stopped.

“I’m so sorry,” she sobbed, lightly rocking the bundle of rags from side to side. “I’m alone, and I have nowhere to go. You’ll be better off without me.” Her soft crying was captured in the air as tufts of tiny ice beads—dissipating clouds of unfathomable despair. They would momentarily hover about her face like a thin mask before being swallowed up by the passing gusts of wind from the barren street.

Slowly, she knelt and set the bundle of rags carefully onto the cathedral step. With warm tears running cold as soon as they leaked down her trembling cheeks, she traced her footsteps back down the street and disappeared into the storm. Never to return.

A few minutes later, a priest of the church stepped out onto the front steps. “Good Lord! It’s cold tonight,” Father Brown, a tall, middle aged man murmured while tossing his long scarf over his shoulder. He shoved his boney hands into the pockets of his long coat and took a moment to silently view the whitewashed buildings with awe. They stood like monolithic snowdrifts, rows of naked windows gleaming with ice, like the eyes of a frozen spider.

Father Brown was on his way to a homeless shelter across town to help with the preparation of Christmas Day dinner. Having no family of his own, it brought him more joy to be surrounded by those in need than to be cooped up in the church all night watching old movies on the ancient black and white TV set in his bedroom. Though he rather enjoyed Jimmy Stewart’s performance in the classic film It’s a Wonderful Life, he’d seen the movie at least fifty times by now, and serving the unfortunate souls would be a better use of his time. The smiles on their faces, as warm and inviting as the turkey and mashed potatoes he was lucky enough to serve, was more than he ever could have asked for on this holiest of days. Pulling his hand out of his jacket to check his wristwatch, he realized that if he wanted to catch the late bus to the shelter, he’d have to get a move on.

Hurrying down the church steps, he nearly stumbled. He looked down and saw the bundle of rags resting on the bottom step. At first thought to be trash, the priest sidestepped to walk around the heap of clothing when, suddenly, he heard a weak moan emanating from the bundle of rags, muffled by the layers. Curiously kneeling to get a better look, he nearly screamed when the rags began to shiver and move at his touch.

That’s when he realized something living was wrapped up inside. Fearing the worst, he quickly scooped up the bundle and brought it into the protective walls of the cathedral. Clutching the rag bundle to his chest, he made his way to the nearest pew and slowly set it down, whispering a prayer. Under the glow of various lit candles and assisted by the borrowed white light of the full moon leaking through the stained windows, the priest quickly undid the bundle of cloths.

Lying inside the cocoon of dirty rags was a newborn baby. Still pruned, with dried blood covering her skin and matted hair, her blue eyes rolled listlessly, and dry lips slightly parted to expose purple gums and a swollen tongue.

“Sweet Mother Mary!” Father Brown gasped, reflexively tracing the holy symbol of the cross on his body as he raced his way back to his office. Once inside, his shaking hands grasped the phone on his desk and dialed 9-1-1.

“Yes, I need an ambulance sent to St. Patrick’s Cathedral immediately,” the priest begged, cold sweat breaking out across his forehead. “I have a dying newborn here. Please, hurry!” Abruptly ending the call, he raced back out to the pew and held the baby in his arms. It hurt his soul to look at the child, shriveled and clinging to life, but he forced his eyes to meet hers.

“Don’t worry, little one,” he said, cradling the dying baby tightly in his arms to keep her warm. “God is watching over you now.”

The ambulance arrived at the church not ten minutes later, and the newborn was immediately rushed to a local hospital. The baby was at the brink of death. She was severely dehydrated, and hypothermia had set in, making her breathing shallow and heartbeat slow.

Unable to trace the parents or relatives of the baby, the hospital contacted child services and arranged for the little girl to be placed in foster care, once she was in better health.

Under the watchful care of doctors and nurses, after fighting a series of infections and neonatal abstinence syndrome because of the drugs she was exposed to in the womb, she slowly recovered. The nurses adored the tiny baby and held her in their arms, cooing to her as much as their busy schedule allowed. By the hospital rules her name was Baby Girl, but the nurses named her Elana.
​
She was cleared by the hospital a little more than three months later and was assigned a social worker and given an official name: Elana Smith.

Short, romantic, and emotional. A child, Elana Smith, given the name in a hospital, grows up in the social service system of foster families after being abandoned.
That unfortunate situation leads to others until she joins a boy in foster home care. More psychological pressure enters her mind at the age of thirteen.
However, loving people on her life's journey help her adjust into a beautiful, intelligent woman. Then, at a traditional memory place, another trauma takes place.

Lorraine Carey rated it it was amazing
Absolutely loved Bittersweet Memories. It was very well written and I felt as though I was engrossed deep within a Hallmark movie. I finished this sweet tale in two nights. I couldn’t wait to curl up in bed at night and enjoy this heartwarming tale. I’m anxious to see if there is a sequel.​

Heather Wamboldt rated it it was amazing
Bittersweet Memories is a beautiful and heartwarming novella about two people that were brought up in foster care and thought that they were lost to each other after tragedy struck. This story is one of hope, home, and love.

Philleys Peters rated it it was amazing
This is the sweetest holiday romance that I've read in quite a while! Soulmates and destinies make the cutest love stories. Elana and Luca found each other and during the time of year when hope and good tidings are at its peak of coming true! I love it!