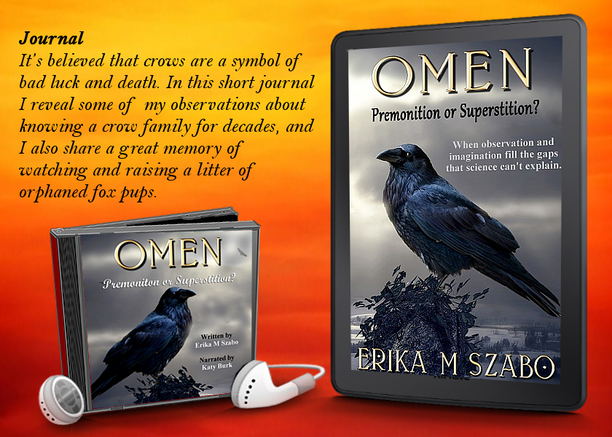 A journal of my friendship with a crow family

It’s believed by many, that crows are a symbol of bad luck and death, but by others, crows are the symbol of life, magic, and mysteries. They also symbolize intelligence, flexibility, and destiny.
Grandma often told me superstitious stories and myths. Most of her perceived omens remained unexplainable myths, but she always insisted that if we didn’t pay attention, who knows what would’ve happened. I didn’t become deeply superstitious like my grandma was, but I always kept my mind open for possibilities and for things I simply couldn’t explain by rational thinking.
​
In this short journal I reveal some of my observations and experiences with having the privilege to know a crow family for decades, and I also share a great memory of watching and raising a litter of orphaned fox pups. They were our guests for one summer, but they stayed in our hearts forever. Watching them using their instincts and developing their skills to become mighty hunters of the night had been an invaluable experience.
I’m a writer. Am I telling you a true story or is this a figment of my imagination? You decide. I wrote this story only for the purpose of entertainment, but I hope you will be able to relate to my observations, feelings, and experiences, and appreciate these intelligent, majestic birds as much as I do.