Read to Help animals in shelters and sanctuaries

People want to help, but sometimes they can't afford a sizable donation and they feel like donating a few dollars is not worth the effort or it wouldn't make a difference.
That's why I thought about offering my books so people can spend a small amount on a good cause while enjoying the books.
Every purchase of the eBooks, prints, or audio books will help animals in shelters and sanctuaries.
I will donate the proceeds from the book sales and my goal is to raise $200 for each donation.
​
If you know a sanctuary that doesn't euthanize not adopted and senior animals, please add their website link or contact information in the comment box below or send me a CONTACT message.

You're helping animals while you read fun books

About Rainbows and Clouds

A story from the book

It was a beautiful summer day and my hubby and I were enjoying our afternoon coffee on the patio. Miau, our Calico cat, took a catnap on my lap and our Shepherd, Lucky, was snapping at the pesky flies in the shade of the forsythia bush.

We watched the hummingbirds drinking nectar from the flowers on the windowsill. The tiny birds flew lightning fast to their nest on the pine trees in the backyard, carrying the sweet nectar to their young ones.

The peaceful time was interrupted when my hubby’s friend, Carl, pulled into the driveway. He got out of the car, quickly opened the back door and let out his Rottweiler, Crow. The dog ran over to the azalea bushes to relieve himself.
“I’ll put the leash on him in a minute. He just had to go badly; it was a long ride,” he said, and with the leash in his hand, he started walking toward his dog.

Feeling worried, I stood up. Past experiences taught us to be cautious when Crow was around. He was a bully and attacked our gentle natured dog to show her who’s boss when he wasn’t securely tied up on the leash.

I was watching Carl approaching his dog, but before he could get close, Crow bolted and ran toward us. My hubby yelled, and his friend tried to catch the dog but slipped on the grass and fell to his knees. I watched in horror as Lucky cowered behind my hubby.

Suddenly, we heard a loud meow. I saw Miau darting, charging like a bullet toward the approaching Rottweiler. She pounced, let out a furious growl and sank her needle-sharp claws into the huge dog’s face. Crow let out a painful cry and tried to shake the cat off his face. Miau wouldn’t let go and she kept growling furiously.

Carl finally caught up with the Rottweiler and clipped the leash on his collar.
My hubby tried to peel Miau off the dog’s face. After a brief struggle, the tiny, growling and hissing furball pulled her sharp claws out of Crow’s face and let him go.

Hubby put Miau down. The cat puffed her hair, hissed indignantly a few times, and then walked over to our shaking dog. The cat licked Lucky’s face as if she was saying, “Don’t worry about that thug, buddy. I’ve got your back.”
​
The three of them crossed the rainbow bridge long ago and I’d like to believe that Miau and Lucky have found each other there, too. And I also like to believe that if Crow tries to bully Lucky, Miau is right by her side to protect her best buddy.

About the Basketful of Kittens

This painful memory stayed with me throughout my nursing career and I'll never forget this little boy who loved listening to my stories. As a young nurse, I worked in the pediatric unit for a short while. Johnny was a nine-year-old cute as a button little boy who had leukemia. The medications and treatments wiped him out physically and emotionally but he still had a sweet smile for everyone who entered his room.

Restrained sobs choked me every time I saw his pale, angelic little face and heard him say, "Hello, beautiful. Give me that shot quickly and tell me a story." (his father was a flirt and he imitated him by calling the nurses beautiful or gorgeous.)

Our storytelling sessions started when he had a very bad day and the medications didn't work to suppress his nausea and headache. All I could do was sit by his bed, hold his hand and wait for the stronger medication to kick in. To break the silence and get his attention away from heaving and pain, I started reciting a fairy tale, "Once upon a time..."

As I continued the story, his breathing slowed and he hung onto every word seemingly forgetting his pain and mystery for a few minutes. The story with medicine became our routine and one morning, because I didn't remember any more fairy tales that I had read as a child, I started telling him my childhood memories.

One of my fondest memory was how my best friend and I saved four drowning kittens when a cruel neighbor threw them into the river.

Johnny grew weaker and weaker and could listen to the story only a few minutes at a time, but he remembered the next day where we left off. When we got to the part where my mom prepared a wicker basket for the kittens, Johnny's eyes lit up and said, "A kosarnyi kiscica" which means "A basketful of kittens."

When I wrote this story into a children's book last year, in memory of little Johnny, I gave the title to the book he came up with: A Basketful of Kittens.
​
I never had a chance to tell him the end of the story. There were only a few minutes left to tell him how Daniel and I dealt with the neighborhood bullies, but when I entered little Johnny's room the next morning, his bed was empty.

"Erika writes a tale that all of us who have experienced loss wish for.  What if in a parallel universe our loved one still exists and can return to us.  Are they trying to get here?  Do they feel as empty with out us?  Valerie has lost her Caleb, and in an alternate universe the reverse is true.  In Caleb's reality his father, a brilliant inventor,  is experiencing the same anguish.  Will a teleport be able to fix everyone's hearts? Or will joining the universe cause irreparable damage?  I love how Erika explained the issues." ~Cindy J. Smith

Read the story of our orphaned baby foxes

We found seven orphaned fox pups in our backyard, back in 2005, and I want to share my memories of them with people who love and respect animals. Watching these magnificent wild animals as they grew, played, learned and fought for leadership, was a wonderful experience. They demonstrated their wild instincts as well as their love and compassion for one another. They will always be in our memories and our hearts. For one delightful summer, we had our very own Fox family.
The pictures in the book are my amateur, bad quality photos that I made with a cheap, digital camera hiding behind trees, at the corner of buildings and in the bushes, but I wanted to add the original pictures to the book instead of illustrations.
click here 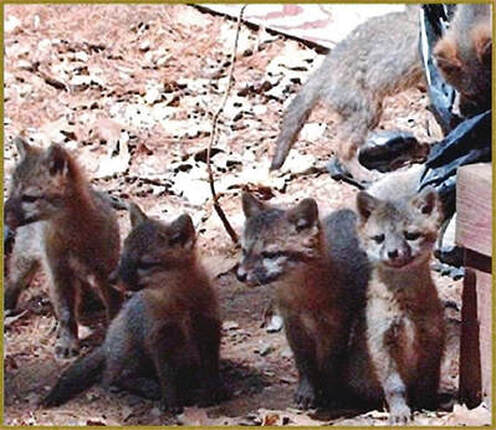